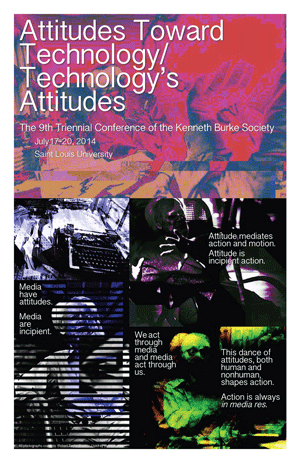 Attitude mediates action and motion. Attitude is incipient action. Media have attitudes. Media are incipient. We act through media and media act through us. This dance of attitudes, both human and nonhuman, shapes action. Action is always in media res.

Taking both Burke’s attitude and his rhetorical philosophy of technology as points of departure, The Ninth Triennial Conference of the Kenneth Burke Society welcomes proposals that focus on attitudes toward technology and technology’s own attitudes. We also welcome proposals that focus on any Burkean subject. The conference will be hosted by Saint Louis University in historic Midtown, home of the Grand Center, the place for the arts in St. Louis, from July 17-20, 2014. Saint Louis University is also home to the Walter J. Ong, SJ, Center for Language, Media and Culture as well as the Ong Archives. In the middle of the country, in the middle of the city, we will grapple with being in media res.

In a retrospective to Attitudes Toward History, Burke defines attitude as “the point of personal mediation between the realms of nonsymbolic motion and symbolic action” (394). For Burke, these realms are tightly knitted, and as Debra Hawhee reminds us, we should see them as “an irreducible pair, contiguous but distinct” (Moving Bodies 158). Stuff and story dance in attitudes.

In his reexamination of Burke’s status as a luddite, Ian Hill reminds us that “Burke’s writing was fraught with technological anxiety, and his negative attitude toward technology developed over many decades.” Nevertheless, Hill demonstrates how Burke developed a “rhetorical philosophy of technology.” “Burke’s concept of technology entailed that rhetoric motivates technology, and that technology motivates behavior. For Burke, the realms of technology and rhetoric are inseparable because technology and motivation are fundamental conditions of human existence.”

The Kenneth Burke Society conference welcomes not only those who are particularly invested in Burke but also those who ask the same sorts of questions, explore similar avenues of scholarship, and see rhetoric as tightly knit to symbols, bodies, and environments. We are building a big tent in St. Louis. The Ninth Triennial Conference will feature participation by students and scholars from a wide range of fields, and we welcome proposals that address topics of continuing relevance in Burke studies, including Burke and his circles; archival research in the Burkean corpus; the meaning and relevance of particular Burkean texts; Burke in the fields; the future of Burkean studies; and new applications of Burke’s insights to contemporary issues. We especially encourage those proposals that focus on attitude and technology: the range of conceivable connections and potential points of departure is limitless.

The theme of attitudes toward technology and technology’s own attitudes calls on conference participants to engage Burke in a contemporary scene increasingly saturated and mediated by technology:

We invite individual presentations, panels, and seminar topics exploring the above sets of concerns. Proposals should be submitted via email to kbsconference2014@gmail.com. The submission window runs from October 1, 2013, through February 14, 2014. All proposals are due by 11:59 p.m. on February 14, 2014. Proposals for individual presentations should be 250-350 words in length. Proposals for panels or other formats may be up to 500 words in length. Acceptances will be announced by March 14, 2014.

Attendees may register for the conference online starting March 17, 2014. As with past conferences, affordable registration fees will include all meals and special events. Further details will be published on the conference website from now until the conference.

Saint Louis University is located in St. Louis, MO. The Busch Student Center is located in bustling Midtown St. Louis. For a list of dinning options in and around campus click here. On-campus lodging is available at the recently built Hotel Ignacio, the Water Tower Inn, and in the recently renovated Marchetti Tower West. 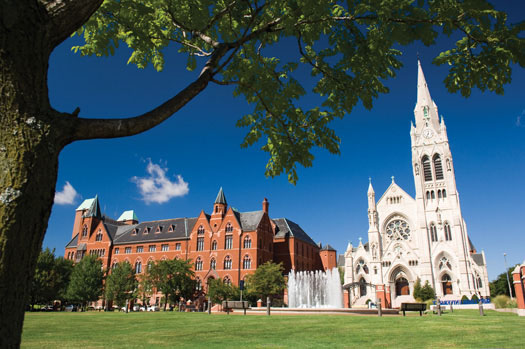 The conference chairs are Paul Lynch (plynch11@slu.edu) and Nathaniel Rivers (nrivers1@slu.edu). The conference is sponsored by Saint Louis University, the Walter J. Ong, SJ, Center for Language, Media and Culture, and the Kenneth Burke Society.

There are multiple ways to get from the airport to the conference site/residence hall. St. Louis Metrolink will take you to the Grand Avenue stop, which is about about half a mile south of Marchetti Towers (3530 Laclete) and the Busch Student Center (20 N. Grand), and about a mile north of the Water Tower Inn (3545 Lafayette). If you prefer to take a bus from the Grand Stop to either location, you can take the 70. The Metro Link Trip Planner can be found here.

If you prefer an airport shuttle, here is GO Best Express. A cab from Lambert to the SLU campus will run approximately $38.00.